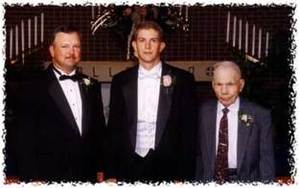 Hinkson Angus originated in Lazbuddie, Texas by my father Frank Hinkson Sr. The very first cows that were purchased came from the Ralph Smith Dispersal Sale in Chillicothe. Missouri in 1959. The true foundation cows were purchased from the Essar Ranch in San Antonio in 1961. These cows were mainly Marshall bred cows and were bigger, stouter, more useful cows than the Dor Mac Bardoliermere cows from Missouri. In 1963, my dad purchased 3 bulls from the Wye Plantation in Maryland. These bulls, 2 sons of Fabron of Wye and 1 son of the imported Prince of Malpas, greatly improved the genetic base of our herd.

The registered herd was started in order to raise registered bulls for a commercial herd of Angus based cows that was owned and operated by my father, Frank Sr. and my uncle Everett Hinkson. This ranch, purchased in the 1930's, was on the Arizona-New Mexico border and ran around 1500 cows.

From 1960-1975 all the registered bulls that were suitable went to the Arizona ranch to work. The Arizona ranch was a big, rough, dry country and these bulls needed to have a little more frame and performance than what most breeders were raising in the 60's. The bulls had to travel long distances not only to breed cows but also to water, so they had to be sound on the feet and legs as well. Records indicate in 1954. 330 heifers off of that ranch sold into Colorado for 18 cents/lb and 440 steer mates sold to the same Colorado ranch for 20 cents/lb. Prices have sure changed in the last 50 years! The goal then is the same as the goal now: To raise Angus cattle that work for the commercial cattleman in a real world environment.

In 1961, my dad let me select 5 registered heifer calves and thus my herd started. By the time I attended college in 1969 my herd had grown to 15 cows and they basically paid my way through school. I graduated from Texas Tech in 1973, where I served on the livestock judging team for 2 years. I then moved back to the family operation in Lazbuddie, and we used AI for the first time that year on 10 head of cows breeding them to the great Conan of Wye. Even back then semen was not cheap. Two ampules and a certificate cost $250 in 1973. In 2004 over 200 cows were bred AI. Some of the notable AI sires that have impacted our herd have been: Franchester of Wye, Countryman of Wye, Shoshone Viking GD60, PS Power Play, Skarship Saratoga, Oscar 711. Leachman Right Time, TA El Tigre 423, DHD Traveler 6807. SAF Fame, Sitz Alliance, and Rito 616. These bulls, along with herd sires El Primo of Hinksons and Hinksons Double Take, are the foundation bulls of our herd today.

During the 70's our operation made significant improvement. We had begun using the AHIR program back in the middle 60's and we were using that information to vastly improve our herd. We had the first ever pen of Angus bulls to gain over 4 1bs/day at the Tucumcari, New Mexico bull test. One of our herd bulls, Hinksonite 7, was one of the first original Pathfinder Sires when the initial Pathfinder Report came out. That first report only included 11 total bulls. In 1979, we held our first Female Production Sale there at the ranch. Buyers at that first sale included: Rusk Ranch, Kansas; R&J Ranch, TX; Huckfeld-Krebs, Neb; Deep Down Ranch, TX; Hales Angus, TX; Flint Angus, NM; and Windy Acres Angus, Neb. 80 female lots at the first sale averaged $1,695.

In 1984, my dad sold his share of the Arizona ranch and the decision was made to buy land in Kansas. In January of 1985, Frank II and family moved to the Flinthills of Kansas along with 90 registered cows. The ranch is located 12 miles south of Cottonwood Falls. We have continued to hold female production sales in 1988,1992, and 1996. Bulls off of the ranch have been sent back to bull buyers in Texas and New Mexico as well as here locally in the state of Kansas. We have had a bull sale annually now since 1998, selling around 90-100 bulls each year. We currently have 225 spring calving cows and have developed a fall calving herd through embryo transfer of approximately 150 cows. Another 40-50 embryo calves will be born on the place again this fall.

The third generation of Frank Hinksons (Trey) has now moved back to the ranch full time now after a teaching and coaching stint in Lansing. KS. He and his wife Becky are partners in the Angus operation, and are looking forward to carrying on the name of Hinkson Angus Ranch!